This is a review blog. We receive commissions from purchases made via our links at no additional costs to you. The products featured in our posts are chosen independently and without conscious bias.

When you think about a water filter pitcher, what adjectives come to mind? Drab? Bulky? Just full-on blah? Well, your thoughts might just take a different turn with this water filter pitcher from Ecosoft. This is the case because it looks so sleek that you might even think that it is a pitcher made especially for parties.

We are going to discuss other details about this water filter pitcher, but before we do so, let us first talk about what factors to look out for to see beyond its aesthetics. First and most importantly, we should take a look at how good its filtration system is. Also, a good design helps to minimize any leaking, and last but not least, the capacity.

Do you think all these features are present in the Ecosoft Water Filter Pitcher? Let’s find out! 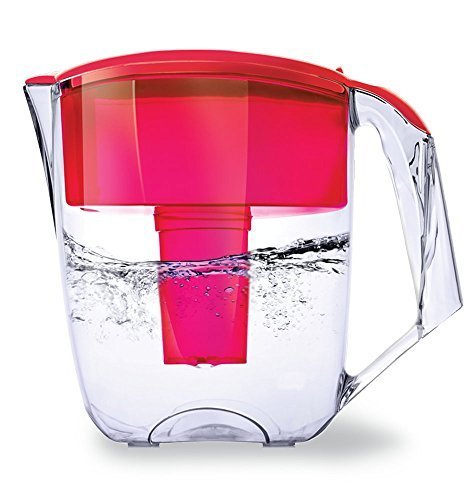 Today, we are going to take a look at the features of the Ecosoft Water Filter Pitcher. More than that, we are also going to list down the advantages and disadvantages of using it. Lastly, we are going to compare it to another product to see which one is better.

The first factor that we mentioned is the filtration system because, again, what use will good looks do if, at the end of the day, you are still left with undrinkable water? This filter pitcher boasts a patented eco-mix technology, which can remove chlorination by-products, chlorine, iron, natural compounds, odors, and hardness.

Not only can it filter out bacteria and harmful substances, but it can also remove dirt, sand, rust, and other bigger particles. The concentration of lead and copper is also decreased. With all those functions combined, you are sure to drink fresh and clean water.

Aside from removing these elements, this system can also add healthy minerals like magnesium and calcium into the water. These prevent limescale formation and sodium ion formation.

The next factor is design, and this is where this filter shines. It comes in five colors, which are black, blue, green, red, and white. These lids standout against the transparent main pitcher. Further, the material used is BPA-free. The flap can be easily opened while the bottom has a rubberized base to prevent any slipping.

Lastly, let us talk about capacity. This filter has a capacity of 10 cups. We are talking about regular sized cups here, not the ones used for specialty coffee. On the other hand, the filter capacity is only two liters.

Summary of the Features 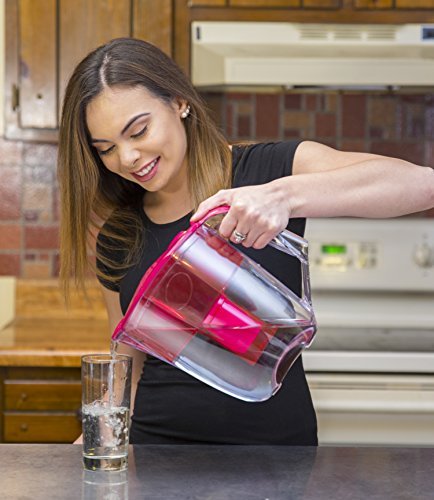 The Ecosoft Water Filter Pitcher is where style meets functionality. Truly, it is an eye-catching water filter, but do not let its looks fool you. Its filtration system works well too. Not only can it filter out harmful substances in the water, but it also adds healthy minerals that can help with the pH level and overall quality of the water.

Expect to have clear, tasteless, and odorless water whenever you use this pitcher. On the other hand, it does have some problems in terms of design that might risk leaking. Further, its capacity is fairly smaller than other water filter pitchers in the market. But what it lacks in size, it makes up in aesthetics.

More than that, it has a certain safeguard against organic formations that might potentially taint the quality of the filtration system and eventually the water. Its bottom is well equipped for any clumsy hands that might slap the pitcher accidentally. Let us just say that spilling occurrences are little with this one. 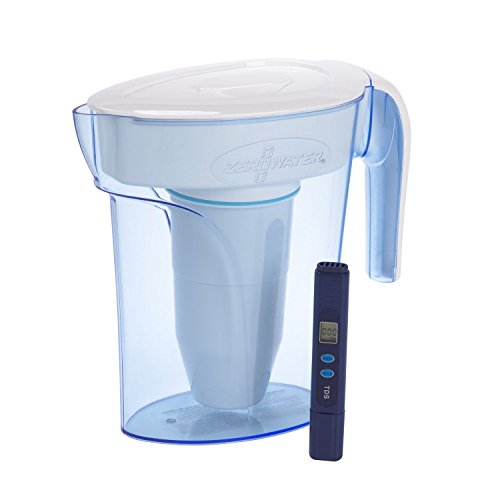 In fact, its filtration system has five different levels. Each level has a different filtering function. For stage one, it can remove suspended solids like rust, dirt, etc. As for stage two, this is where it filters out other suspended solids that stage one missed. Stage three is for removing organic contaminants like herbicides, pesticides, chlorine, mercury, chloramine, and bacteria.

Stage four is where the inorganic compounds are removed. These compounds are nonmetals, metals, and other radiological contaminants. Lastly, stage five is the final filter for other suspended solids, and it also can also hold the resin in place.

Further, this filter pitcher makes use of ion exchange technology that is known for dramatically reducing contaminants. It is also certified by the NSF to reduce heavy metals and lead.

Moving on to its capacity, it can hold up to six cups of water. What is interesting is the fact that the filter of this pitcher is also compatible with other filter pitchers from other brands, namely: Kenmore, Brita, Aquagear, Pur, Waterdrop, Nakii, Berkey, Aquasana, or Frigidaire.

Are the features of the one from Ecosoft enough to beat its opponent? Read on for the verdict.

The Ecosoft Water Filter Pitcher is not really that special. Yes, it does look nice, and it has a good filtration system, but against the ZeroWater Water Filter Pitcher, it is reduced to being basic. Although, that does not mean that you should give this one a pass.

This water filter pitcher is perfect for those who value uniformity in terms of aesthetics. Its sleek design, as well as colors, will surely blend with any kitchen interior. Moreover, if simple water filtering is your priority, then this will not fail you. If you are living in a household where kids run about, this is a good choice because the bottom has a certain cling to it that will not let it slip easily.